No Result
View All Result

Your Guide: Best Smart Watch with a Second Hand 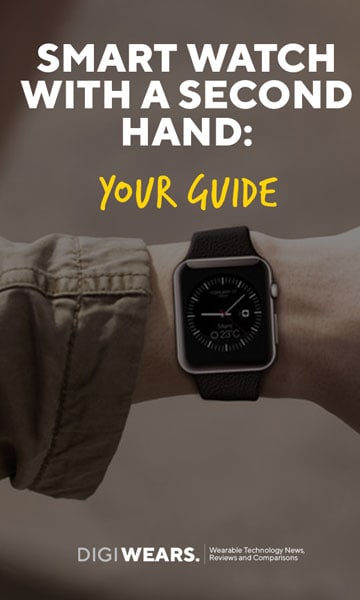 ’m sure you’ll agree with me when I say that sometimes you just have to have that mix of a little bit of old school and new school.

In this case, having a digital watch in analog form.

Having a second hand on your watch really gives your smartwatch that traditional feel.

But finding a digital watch that has a second hand can be tough as many out there, even the newer more expensive ones often do not have this feature.

Below I discuss finding a great smart watch with a second hand.

If you want to know more, all you have to do is read on…

Things to look for before purchasing

Smartwatches have become one of the most used devices in the past few years, and it’s easy to see why.

Whether you need a nice watch you can wear to formal events or a wearable device that monitors your health and fitness goals, a smartwatch with a second hand is a versatile option.

Below, you’ll find our top picks for smartwatches with second hands as well as everything you need to know before making a purchase.

What is a Smart watch with a Second Hand? 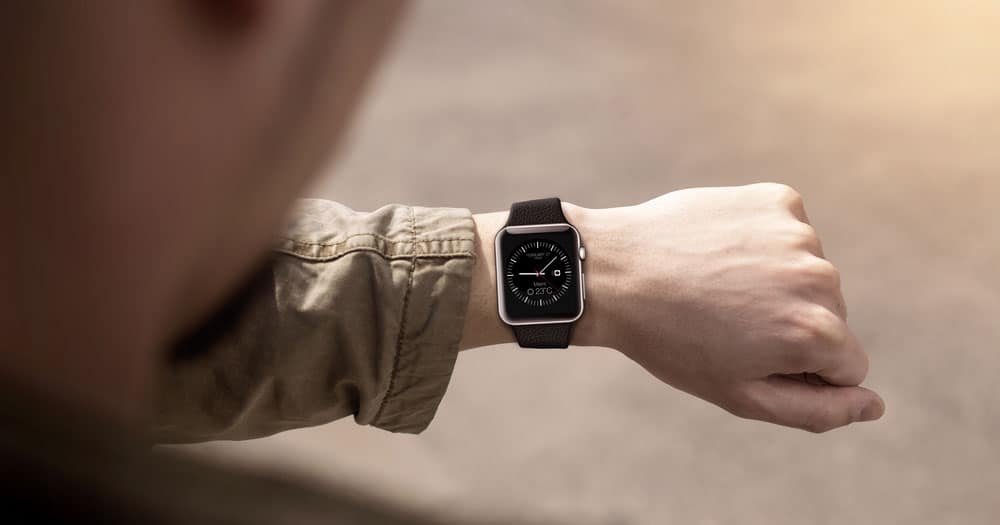 With significant advancements in technology over the past few years, watches are considerably different than they were a decade ago.

Until recently, when someone heard the word “watch,” the picture that typically came to mind was a traditional Swiss watch that displayed the time through mechanical hands.

The latest trends and newest technologies have revolutionized and, in a way, reinvented, the functionality, design, and name of watches.

Not only are smartwatches changing the way society uses watches, but they’ve also become one of the most popular electronic devices.

According to Statista, in 2016 smartwatches were second to Bluetooth sets in terms of large segments, but they’re expected to expand even more by 2021.

Smartwatches have quickly surpassed the traditional Swiss watches and are often known as “hybrid” watches.

Hybrid smartwatches get their name from their ability to connect to the user’s phone and provide them with many of the same features and benefits on a smaller, more transportable device.

The difference between a simple smartwatch and one with a second hand is that these second-hand smartwatches have the features and functionality of hybrids but tell time the same way an analog smartwatch does — through hands instead of displayed numbers.

If a smartwatch with a second hand has the design and features of both analogs and hybrids, then what’s the difference between the two, and why shouldn’t you get one or the other?

The key difference between them lies in the way they display time.

Unlike the hybrid, an analog smartwatch uses traditional mechanical hands to display time, whereas hybrids use digital numbers like phones.

One reason you might prefer an analog watch over a hybrid is that they’re more traditional.

Known for looking sophisticated and classy, having one comes in handy when you need a nice accessory to wear to a formal event, such as a meeting or wedding.

Hybrid smartwatches, on the other hand, contain a wide variety of functions that make their features almost identical to those of a smartphone.

Most connect to your phone so that you can receive notifications and access your phone’s apps easily on the go.

Although both are extremely useful, it can be difficult choosing which type to buy.

For this reason, many people are choosing smartwatches with a second hand.

According to Fossil, the analog and hybrid features make the smartwatch with a second hand a popular choice.

Things to Consider Before Buying a Smartwatch with a Second Hand

Before deciding on a certain smartwatch, it’s important to take a few things into consideration.

Buying the wrong product can result in not only a loss of money but also frustration and a waste of time.

To spare yourself the trouble, take the following precautions before adding a smartwatch to your shopping cart.

Make Sure it’s Compatible with Your Phone 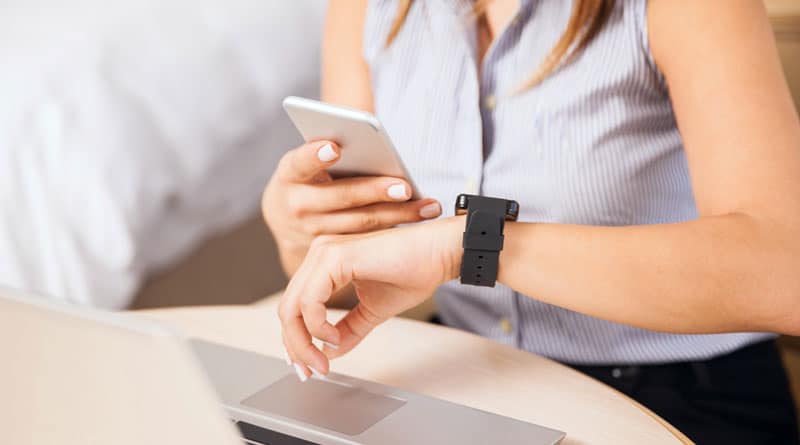 Not all smartwatches are compatible with every phone and buying a smartwatch that won’t work with yours is frustrating and a waste of money.

Several watches only work with iPhones instead of Androids and Samsung’s.

If you have a phone that’s not compatible, then the watch can’t connect.

Additionally, many smartwatches are compatible with all phones, but certain features are only provided for a specific brand (such as iPhone or Android).

Check that the Watch is Easy to Use & Swap

It’s important that the watch you buy is easy to take on and off, especially if you’re planning to use it while working out or tracking activity.

A good smartwatch will be able to buckle and clasp easily.  If the design is complicated, it will be more of a hassle than helpful.

Most hybrid smartwatches will alert you of new notifications just like your phone, but very few will allow you to respond to them.

If you want to be able to interact with these notifications, it’s important that the watch you choose lets you respond to them.

If you’re looking for a watch that appeals more to one gender, then it will be a bit harder to find.

Generally, there’s no distinction between a women’s or men’s smartwatch with a second hand.

It simply boils down to each person’s style preferences.

If you need a watch that gives you style and functionality, then look no further.

Below, you’ll find our favorite selection of smartwatches with second hands to make the process of choosing your perfect watch a bit easier.

If you’re looking for a smartwatch that has clean, traditional features but modern functions, then the Garmin Vivomove Hybrid Smartwatch is worth consideration.

This watch can easily connect to your smartphone, which means you’ll have access to all of your favorite apps — as well as receive all of your important notifications — without having to carry around a big phone.

Not only does the watch pair with compatible smartphones, but it also displays your heart rate, calories, distance, intensity minutes, and VO2 max, making it ideal for those who love exercising.

If you’re not into exercising but still like to keep track of your wellness, the smartwatch includes multiple monitoring features, such as stress tracking throughout the day and a relaxation timer.

Ability to monitor your wellness and fitness goals

Easily receive all of your smartphone notifications

Long-lasting battery life (up to 5 days)

Inability to respond to messages

Compatible with both iPhones and Androids, this watch is easy to share with others.

Plus, if you ever switch brands, you won’t have to get a new one.

Depending on which mode you have set, it has a battery life anywhere from 2 to 30 days.

There are 2 different modes you can use: Smart Mode and Essential Mode.

Smart Mode has a battery life of 2 days, whereas Essential Mode has a lifespan of 30 days.

With Smart Mode, you have easy access to Wear OS by Google, Google Assistant, AMOLED Display, and thousands of apps and faces.

If you have an iPhone, it will also track your health and fitness.

If you prefer to use your phone for accessing apps and receiving notifications, then Essential Mode is best for you.

In this mode, the power of the watch is saved through FSTN LCD display, is still visible in high sunlight, and displays only important information such as the time, date, step counter, and heart rate.

Compatible with Androids and iPhones

Easily connects to phone through Bluetooth

Only able to make calls and send messages with Android, not iPhone

Only compatible with Bluetooth 4.2

Similar to the last watch, the Sapphire Hybrid Watch is compatible with both Androids and iPhones and connects to them via Bluetooth.

If you love a simple look with plenty of functionality, then this watch is sure to suit your fancy with its clean lines and minimal design.

But don’t let the simplicity of the watch fool you — the newest technologies and features have been embedded for great functionality.

Plus, it’s compatible with Health-kit and Google Fit, making it easy to track your fitness activities and goals.

Not only does it include several great functions, but also has a long battery life of 1-5 months for digital features and is waterproof.

Pros of the Sapphire Hybrid Smartwatch

Compatible with both iPhone and Android

Cons of the Sapphire Hybrid Smartwatch

Only comes in one color (“New York”)

Waterproof only from tap water, so you can’t swim with it

Ideal for anyone intrigued by the newest technologies, this watch has multiple functions packed into a sophisticated design.

What makes this watch stand out from the crowd is that Amazon Alexa comes built into it, allowing you to easily use your watch through voice commands.

The voice command feature allows you to do a variety of day-to-day tasks hands-free, such as searching the web, creating events in your calendar, checking the weather, and setting alarms.

Unlike many other watches, the Martian Passport Smartwatch not only allows you to view message notifications but also send texts hands-free with voice command.

Not only can you send messages, but also answer and make phone calls, which makes talking on the go easier.

The notifications the watch sends you aren’t only messages and calls — your email, calendar, and social media notifications will appear on your wrist just as well.

Pros of the Martian Passport

Cons of the Martian Passport

Control music only through voice commands

By far one of the most customizable smartwatches out there, the MyKronoz ZeTime Hybrid Smartwatch comes with changeable watch faces and quick release wrist bands.

Plus, it’s topped off with sapphire glass, a stainless-steel case, silicone watch band, and mechanical hands with smart movement to give it an elegant look.

This hybrid watch is ideal for anyone in need of a stylish watch that can keep track of their daily tasks such as activity and sleep.

You can easily monitor your fitness and health through its activity tracker, heart rate sensor, and sleep monitor features.

Compatible with both iPhones and Androids, it’s also easy to charge and has a long battery life of 30 days.

Not only does it come with a contact charging system, but also a USB magnetic charger.

Only compatible with iOS 8+ and Android 5.0+ smart app

Only view messages and notifications, not respond to them

What is the Best Smartwatch with a Second Hand – Summary

We chose the Martian Passport Smartwatch as our favorite for a variety of reasons.

Every other hybrid smartwatch we reviewed allows the user to receive and view notifications, but only the Martian Passport Smartwatch lets you respond to them.

Whether it’s receiving a text message or answering a call, this watch doesn’t just alert you — it lets you respond.

Additionally, it’s the only smartwatch of the five reviewed that utilizes voice control, which is extremely helpful and convenient for any user.

For me personally, voice control is one of the best features the Martian Passport Smartwatch offers because it allows me to respond to important messages or calls while I’m running.

Stopping my workout to mess with a phone or watch is incredibly distracting and frustrating, so the voice command feature is a life saver for my fitness goals.

Your Guide to the Best Smartwatch for Nurses

I'm an avid techno freak and love new gadgets and technologies. I'm particularly interested in wearable tech and the exciting direction this sector will go in the future.

No Result
View All Result